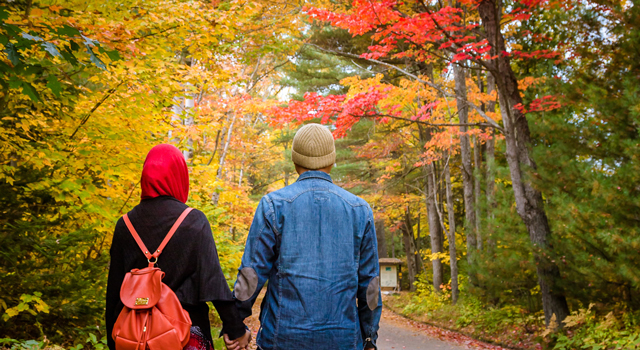 Spend some quality time with your date and discover one of the dreamy locations on the Trans Canada Trail!

Whether you want to organize a romantic day out or even pop the question, a visit to Ontario’s ‘Kissing Bridge’ is a must.

A mere 90-minute drive from Toronto, the West Montrose Covered Bridge is the last remaining bridge of its kind in the province. However, locals and visitors aren’t only enchanted by the history. Famous for the intimacy that the covered structure provides, the bridge has earned a reputation as the go-to place for marriage proposals, engagement photos and wedding videos!

Considering it has been named one of Canada’s most romantic cities, the city of Victoria certainly has a reputation to uphold. Luckily, couples planning a date night in BC’s capital won’t be disappointed!

Impress your date with a luxurious afternoon tea at the Fairmont Empress Hotel, before wandering among the many trendy boutiques in the downtown core. As evening sets in, take a walk along the waterfront and enjoy a beautiful coastal sunset.

Find the Trail: City of Victoria

This historic provincial capital often feels like the set for a rom-com. But, this time, you and your S.O. can be the stars! Wander through Old Quebec’s many art galleries, boutiques and antique shops before skating hand-in-hand at Place D’Youville in the colder months.

Later, cozy up with a cocoa or – better still – some traditional maple taffy from a nearby cabane à sucre.

Although it’s just a short distance from St. John’s, visiting Quidi Vidi feels like getting away from it all.

Sweep your sweetie off their feet with a brisk hike along the picturesque Atlantic Coast, before treating yourselves to a fireside meal at Mallard Cottage – one of Canada’s finest restaurants.

Did you know that Whitehorse ranks as one of the most romantic places in Canada? The natural wonders of the Northern Lights appear almost daily from late August to mid-April, and offer a breathtaking backdrop to your date night.

Adventure junkies can also rev things up with a snowmobile tour on one of the many Trail sections nearby.