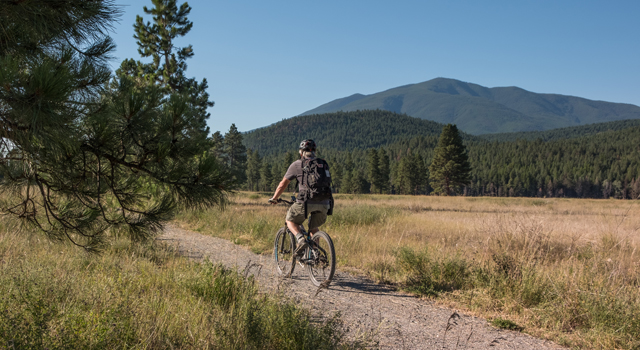 From coastal waters to majestic mountains, beautiful British Columbia astounds visitors with a dazzling display of all that nature has to offer. Not only does the province boast extensive land-based sections of the Trans Canada Trail, it is also home to beautiful water routes for canoeists and kayakers.

This 44-kilometre section of the Trans Canada Trail runs from Cranbrook to Wardner in southeastern BC. A longtime First Nations route, it was used for centuries by the Ktunaxa people travelling along the Kootenay River.

Hike, horseback ride or cycle along open grasslands, streams, rivers and stunning mountain vistas. Fuel up in Cranbrook with a coffee or snack at a local café or restaurant, then head outside!

The Rampart Loop is a 6.5-kilometre family-friendly option that runs most of the way on an old railway and is relatively flat, while the Mayook Trail offers 17 kilometres for exhilarating mountain biking with a 200-metre elevation change. For a more scenic ride, the 21-kilometre Ha-Ha Creek Road Loop Ride connects to Wardner, where you’ll find a lovely provincial park on the shore of the Kootenay River.

The City of Dawson Creek section of the Trail spans 13.3 kilometres and is made up of a combination of paved and gravel road, ideal for hiking, cycling, cross-country skiing or snowmobiling. There are several access points along the Trail throughout the city, so you can start and stop where you like.

Situated 1,185 kilometres from Vancouver and 1,403 kilometres from Whitehorse, Yukon, Dawson Creek is located at Mile 0 of the Alaska Highway. Explore downtown via the Dawson Creek Walking Trail, a 5-kilometre section of trail that meanders through the city, where you’ll find a variety of restaurants and shops. The Dawson Creek Art Gallery, housed in an old grain elevator, is definitely worth a stop. Commemorate your trip with a photo at the Mile 0 Post, downtown.

A perfect balance of urban and rural, this 34-kilometre stretch of the Trail meanders through Western Canada’s largest city. The Trail connects a number of communities, starting at the east end of the city and continuing through to Granville Island, Kitsilano, the West End, Coal Harbour and the world-famous seawall in Stanley Park, which was recently rated and reviewed for accessibility as part of Trans Canada Trail’s partnership with AccessNow.

The spectacular mountain scenery behind the waterways of Burrard Inlet makes for a picturesque urban setting. Hike or walk through the city and stop for a coffee or a beer at one of Vancouver’s many microbreweries, or cycle around the seawall for views of the North Shore and mountains, then stop for a picnic on the beach or check out one of the West End’s many quaint bistros or eateries.

Explore the city’s crown jewel, Beacon Hill Park, home to peacocks and a petting zoo, making it a sure hit with the little ones. Then follow the David Foster Harbour Pathway, a pedestrian-only route, that showcases the city’s beautiful shoreline, charming harbourfront and historic buildings.

Start at Dallas Road for beautiful beach views and walk or bike to the Ogden Point Pier, then continue to the Inner Harbour, a gem in downtown Victoria right next to the provincial legislature, the renowned Empress Hotel, the Royal BC Museum and Fisherman’s Wharf.

This historic trail, built along the former CN Railway Line from Shawnigan Lake to Ladysmith, is a Vancouver Island gem! Running through the stunning Cowichan Valley, with its idyllic collection of picturesque forests, farms and wineries, small towns and Indigenous communities, this trail also crosses eight restored wooden trestle bridges that offer unparalleled views of the rivers below.

A must-see along the Trail, the curved Kinsol Trestle spans 187 metres and is one of the tallest free-standing timber trestles in the world. The Skutz Falls area between Duncan and Lake Cowichan offers trail users views of Hill 60 Ridge, and also traverses marshlands populated by a variety wildlife. Bush Creek, at the north end of the trail, features a wooden bridge that connects users to the Regional District of Nanaimo’s section of the Trans Canada Trail. At the Bush Creek Bridge, more adventurous users may want to explore the Christie Falls Trail – a challenging route, but worth it for views of picturesque waterfalls!

This historic rail trail was built on the route of the Kettle Valley Railway, opened in 1915 to transport silver ore to the coast.

The Penticton section of the Kettle Valley Rail Trail is well known for its beautiful views of Okanagan Lake. Journey along gravel and paved paths, over trestles and through tunnels, passing through varied landscapes with rich cultural and historic significance. Pause at a picnic area along the trail for a rest and a snack, or stop at one of the local wineries for a tasting (or two).

Appropriate for users of all skill levels, this is an ideal family-friendly option for hiking, walking, cycling or cross-country skiing.

This greenway runs from the Pitt River Bridge to Harris Landing and follows the Fraser and Pitt River dykes, offering excellent opportunities for walking, cycling and bird-watching. This trail links to Osprey Village, which offers plenty of cafes and amenities, as well as scenic waterfront views of the surrounding mountains and farmland. On a clear day, the mountains of Golden Ears Provincial Park can be seen.

Keep an eye out for osprey, hawks, ducks, and maybe even seals and muskrats. The section along the dykes is relatively flat and accessible, and is an excellent trail for people of all ages and abilities, although the paths leading to the riverside section have a steep slope.

A gem of the Squamish-Lillooet Regional District, this trail begins at the Squamish waterfront and runs north for 103 kilometres, through Whistler and Pemberton, linking the Pacific Ocean with the snow-capped Coast Mountains.

Along the trail, keep an eye out for trilingual signs and interpretive signage displaying First Nation place names and logos, which were created in collaboration with the Squamish and Lil’wat Nations. The Sea to Sky Trail offers both easy outings and strenuous adventures all year round for walkers, hikers, cyclists and cross-country skiers.

Winding gently through a beautiful river valley, the Slocan Valley Rail Trail boasts 52 kilometres of incredible scenery. Follow the Slocan River from the Kootenay River in the south to Slocan Lake in the north – multiple entry and exit areas are available.

Start out near Krestova and continue north through the charming community of Winlaw en route to the village of Slocan, home to a large sandy beach and the jumping off point for Valhalla Provincial Park. In the summer, cool down with a dip in the lake at the end of your journey. In the colder months, head out for a hike, walk or exhilarating cross-country ski and stop at a local café to warm up with a snack or a drink. Keep an eye out for eagles, moose, elk, deer, swans, otters and more!