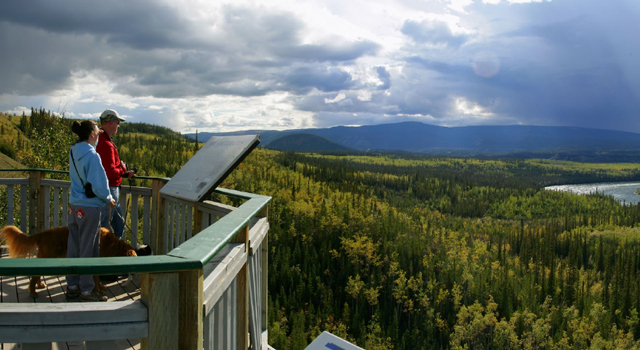 Wild, mountainous and rich in diverse histories, Yukon promises unforgettable experiences to all outdoor enthusiasts. Discover Whitehorse’s network of trails, which brings you along the majestic Yukon River, the S.S. Klondike National Historic Site and the Kwanlin Dün Cultural Centre.

Discover these natural and historical wonders on your next trip north.

All along the city’s waterfront, outdoor art vividly tells the story of Whitehorse and its peoples. Get a copy of the Whitehorse Art Walk map at the Visitor Information Centre, and listen to the audio tour of each work through your earphones. The sculptures, murals, stained glass and totem poles you’ll see are inspired by nature, First Nation legends, Gold Rush characters and modern life in Canada’s North.

Stop to marvel at the S.S. Klondike, one of the largest 1930s sternwheelers to travel the Yukon River and now a National Historic Site of Canada. The largest sternwheeler of the British Yukon Navigation Company, the S.S. Klondike was once one of many such riverboats that could be found along the Yukon River in the early 20th century. Now, it rests permanently on the banks of Whitehorse’s waterfront after being restored and refurnished, and invites visitors to discover a time when riverboats and rail linked Yukon to the rest of the world.

At the Kwanlin Dün Cultural Centre, learn about and celebrate the heritage of the area’s First Nation people through its exhibitions and workshops. The centre hosts visiting artists throughout the year.

Beer enthusiasts rejoice! Whitehorse is home to three excellent breweries, plus great food and coffee, so stopping for a drink or snack is never a bad idea.

Dawson City Trails run from the north end of Dawson City, on the traditional territory of the Tr’ondëk Hwëchin, along the Yukon River dyke to the confluence of the Klondike River. You’ll find numerous rest areas and interpretive kiosks along your route, including signage about the living history of the Tr’ondëk Hwëch’in people, and various Parks Canada National Historic Sites.

On the waterfront side, check out the S.S. Keno, a steam-powered sternwheeler from the Gold Rush. Front Street’s shops and restaurants are just steps off the trail. In the east end of the city, the Ninth Avenue Trail is a widely used 2.5-kilometre walking trail. It follows historic Ninth Avenue, used during the Klondike Gold Rush, then abandoned once gold seekers left the area. It features old relics, local flora and fauna, and acts as a feeder trail to more rigorous and multi-use trails in the region.

Walk, cycle or horseback ride along this 6.8-kilometre Trail section in the warmer months and cross-country ski or snowmobile in colder weather. Journey from the community of Haines Junction to Pine Lake.

Best known as a camping spot and day use park for canoeing, kayaking, fishing, picnicking and swimming, the park features incredible vistas of Paint Mountain, along with a playground and a beach. In Haines Junction, at the base of the Saint Elias Mountains, the Da Ku Cultural Centre showcases the culture and history of the Aishihik First Nations.

You’ll also find a bakery and some restaurants and bars in town.

Note that ATVs are permitted on the Trail, so keep an eye out and use caution. Three access points for the Trail are available in Haines Junction.